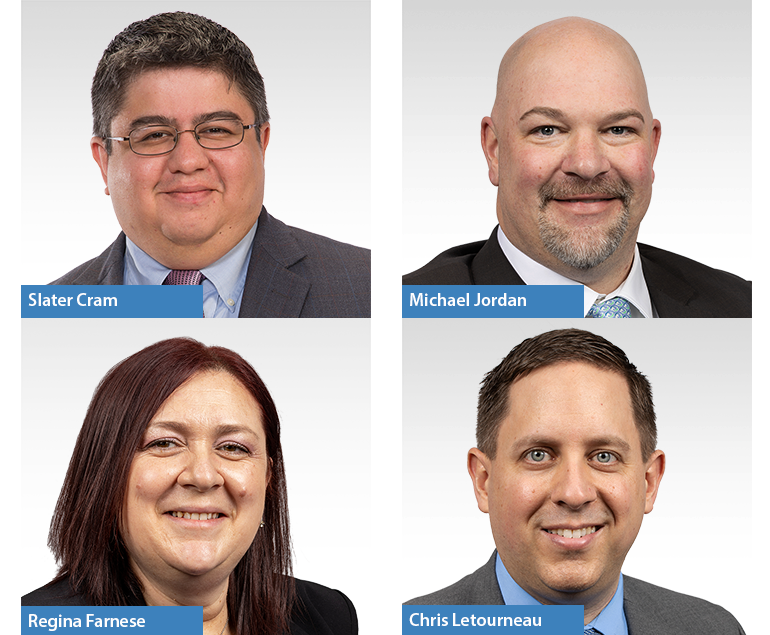 Joseph DeVito, president and CEO of The Village Bank, has announced the promotion of Slater Cram as well as the hiring of Michael Jordan, Regina Farnese and Chris Letourneau.

Slater Cram, who joined The Village Bank in 2006, was promoted to assistant vice president/digital banking manager. A Newton native, Cram had been the manager of the Auburndale branch since 2016. He previously served as the assistant manager of the West Newton branch, a supervisor in Auburndale and a teller at the Waban branch. In his new role, he will be responsible for advancing the Bank’s digital banking strategy through online and mobile channels. He holds a degree from Boston College.

Michael Jordan was hired in February as vice president/branch administrator. He previously was a senior vice president at Members Plus Credit Union and also held positions at Metro Credit Union, Salem Five Bank and Marblehead Savings Bank. The Peabody resident will be responsible for overseeing the day-to-day operations of the Bank’s branch network, elevating the customer experience and executing best practices for retail banking. He holds degrees from Bentley University and Northeastern University.

Regina Farnese was hired in February as assistant vice president/Auburndale branch manager. A resident of Auburndale, Farnese had been an assistant vice president/branch manager for Santander Bank since 2010. She also held positions at Randolph Savings Bank, Boston Federal and Citizens Bank. She will be responsible for managing the Bank’s largest branch office. She holds a degree from Fisher College and enjoys traveling with her husband and three children.

Chris Letourneau was hired in January as assistant treasurer/marketing officer. He previously worked as a sports editor for the Boston Herald and has done marketing work for Laudio, Inc. He will be responsible for driving and executing the Bank’s marketing initiatives and managing The Village Bank website. He is a Newton resident and holds a degree from Stonehill College.